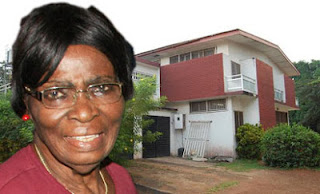 Kamene Okonjo, the 82-year-old mother of Nigerian minister of finance, Ngozi Okonjo-Iweala, has been freed. She had been kidnapped on Sunday in the Delta state.

Local security forces reported that the Nigerian military has arrested 63 people in the last few hours in an operation to free the captured woman, a retired university professor. The two policemen guarding the Okonjo family residence during the kidnapping are also in custody.


“I can confirm that Professor Mrs. Kamene Okonjo, wife of the Obi of Ogwashi-Uku, Professor Chukuka Okonjo and mother of the Coordinating Minister for the Economy/Minister of Finance, Dr Ngozi Okonjo-Iweala was released this morning, five days after her abduction. The Okonjo Family is full of thanks to the Almighty for this happy development. The family is also highly appreciative of the support and encouragement of President Goodluck Jonathan; the Country’s security services for their excellent operations; Governors Emmanuel Uduaghan of Delta, Peter Obi of Anambra, Rotimi Amaechi of Rivers and other Governors…"