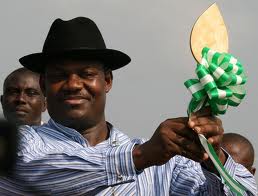 The Rivers State Flood Relief Committee which by last month had spent N300 million said it was ready to face probe of its financial activities. Tele Ikuru, the state deputy governor and chairman of the committee said any group was welcome to probe the committee’s activities.
The committee’s position followed the recent statement by Social Action, a non-governmental organisation (NGO), which accused the committee of causing the death of one Chidimma Maureen Lucky, said to have been suffering from Acquired Immune Deficiency Syndrome (AIDS) and Human Immuno-Deficiency Virus (HIV) HIV/AIDS.


The NGO had alleged that the deputy governor ordered Lucky to be evicted from the camp, and that the woman died as a result of the eviction. The group went further to demand for probe of the finances of the emergency committee.
The allegation had triggered reaction from the Rivers State government which had won commendations from the presidency and others for the manner it managed the recent flood disaster in the state. The state had in the wake of the flood, set up 26 camps that catered for over 830,000 victims.
But reacting to the NGO’s comment, Ibim Semenitari, Rivers State commissioner for information, said the state did not conduct any HIV tests in the first place. She declared that the chairman of the committee did not at any time order the eviction of any victim, and that there was no reason for such action “because the state has one of the best HIV/AIDS management actions including a robust free drugs disbursement system that is helping persons from even outside the state, and so could not have discarded an indigene just because she was infected.”
The deputy governor on Sunday made it clear he never at any point ordered the eviction of any person and wondered how Social Action found that the woman had AIDS in the place and why the group did not take up the matter with the layers of authority if it truly found out that such a thing happened.
On his part, the deputy governor said: “There is no communication whatsoever, verbally, in writing or through any other means, by any individual, corporate body or even from Social Action, concerning the issue of the said Lucky, her HIV status, her health condition or any other issue concerning her before the deputy governor or the flood relief committee or any other agency of the government to the knowledge of the deputy governor,” he said.