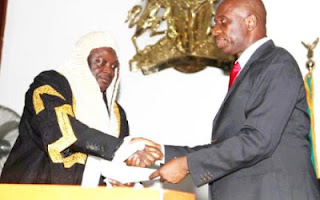 Governor, Mr. Chibuike Rotimi Amaechi, has presented a 2013 appropriation bill of N490.32 billion to the State House of Assembly for consideration and possible passage into law.
Presenting the budget proposal the the House, yesterday in Port Harcourt, Amaechi said that the proposed figure was reached after a careful consideration of project submissions, options and factors that were needed to achieve the developmental targets of the state government in view of the challenges facing us as a state.

He stated that the proposed budget is N52.32 billion higher than N438 billion appropriation of the out-going fiscal year, and said that it translated to an 11.95 percent increase in the budget volume for 2013.
Amaechi said that the budget was expected to be funded by statutory allocation from the federation account of N245 billion and internally-generated revenue (IGR), including social levy of N80 billion and prior year balance of N48.32 billion as well as bond proceeds of  N100 billion and World Bank/African Development Bank (AfDB) credit of N17 billion.
He told the legislators that the capital expenditure proposal for 2013 was N314.30 billion as against N323.70 billion in 2012 while the proposed recurrent spending was N176.02 billion as against N114.25 billion in 2012.
According to the governor, a breakdown of the capital budget showed that the economic sector would have N93.09 billion with the Ministry of Works having the lion share of  N65 billion while Power gets N15 billion.
Also, under the capital budget, the social sector would get the sum of  N65.50 billion with the Ministry of Education getting N47.81 billion while the Health get N10.23 billion.
While appealing for a speedy passage of the bill, the governor pledged the commitment of his administration to accountability and transparency in 2013.
Source :Leardership
Posted by Unknown at 2:24:00 pm