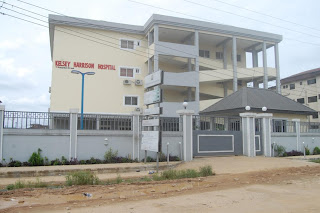 Rivers Commissioner for Health Dr. Tamunoiyoriari Parker stated that one of the main reasons for establishing the Kelsey Harrison Hospital is to put an end to overseas referrals. The Commissioner Dr. Parker said, this during his visit to the hospital, as it commences operation. He said Government has invested about 2 billion naira to establish the hospital which would be run by International Trauma and Critical Care Limited (ITCC), an International Hospital Management Firm. Dr. Parker said, for sustainability Government had gone into agreement with the management of the firm to run the hospital for the next 20 years, with an opportunity to review the contract every five years.

While debunking insinuation that the hospital is for the rich, he said emergency cases would be free, adding that patients referred by the free medical care programme from Government health facilities were also to enjoy free medical care at the hospital. The hospital, he maintained, was built with tax payers’ money, so tax payers will enjoy free medical in the hospital. In his remarks the Country Representative Officer of the International Trauma and Critical Care Limited, Dr. Sydney Ibeanusi said the ITCC is a global concept which is articulated to ensure quality medical services and delivery  in  developing countries like Nigeria. He said the ITCC is partnering with the Rivers State Government to bring quality healthcare delivery that would be affordable, accessible and sustainable. According to him, part of the vision is to develop human capital through the training of local personnel that would take over from the expatriates when the contract expires. He said the hospital, which will be running skeletal services for now, received its first patient at five minutes past eight in the morning on Monday the 7th of January 2013.