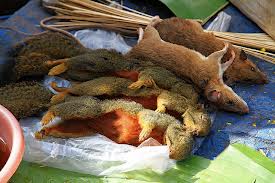 Tragedy struck at a local market in Damboa town of Borno State on Monday when some unknown gunmen killed 18 hunters who were trapped in the market while selling bush meat.
Sources said the hunters also served as vigilante group, helping the police and local authorities in taming sundry crimes.
It was gathered that the gunmen, numbering seven and armed with AK 47 rifles, stormed Damboa on the market day and went straight to the stand of the hunters and shot all of them.
The market, which was filled to capacity, was thrown into confusion and pandemonium as traders and customers scampered for safety, witnesses said.....Read More after the Cut

"The attackers audaciously moved straight to the stand of their targets in the market and opened fire...there was no sign of fear or sympathy," a local said.
He added that "unknown people" have warned the hunters against selling wild animals. "They (unknown gunmen) had dropped some notes, warning that selling bush meat is against the teachings of Islam and eating the meat of monkey is haram," he said.
It was gathered that deputy governor of Borno State, Zanna Umar Mustapha, who was on his way back to Maiduguri from Biu shortly after the attack was baffled when he sighted the deserted town of Damboa, a development which prompted him to go straight to the palace of the District Head, Alhaji Abba Ahmed.
As at the time of filing this report, no group has claimed responsibility for the brazen daylight attack.
Both the police and the Joint Task Force (JTF) could not be reached for comments as the telephone lines of their spokesmen had remained switched off up till the time of filing this report.
Posted by Unknown at 8:38:00 am