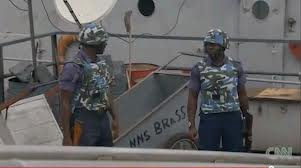 So foreigners now help us steal our oil, how sad. Yesterday the Central Naval Command transferred 12 foreign suspected oil thieves and their alleged Nigerian collaborators it arrested within its areas of responsibility to the Economic and Financial Crimes Commission (EFCC).
It was learnt that 10 Indians and two Ghanaians were among the suspects handed over to a team of EFCC operatives from the commission's zonal office in Port Harcourt, Rivers State. The team was led by EFCC's Deputy Detective Superintendent, Mr. Macaulay Olayinka.
LEADERSHIP gathered that the suspects were arrested on board two vessels, MT EVE and MT ASHKAY, in Akasa and Sangana Rivers respectively.
The Flag Officer Commanding, Central Naval Command, Rear Admiral Johnson Olutoyin, explained that the suspects were apprehended when MT ASHKAY was intercepted by a naval ship, NNS Predator, off Sangana River with cargo suspected to be stolen crude oil.

Olutoyin who spoke in a brief ceremony at the command's headquarters, Yenagoa, said the vessel, which was formally christened Wine Trader, was owned by Krishna Shipping Inc. and operated by Veesham Shipping Inc.
"The product on board MT ASHKAY is suspected to be stolen crude of about 157,822 litres in her cargo tanks without papers to justify the cargo.
"Moreover, the tanker is not listed in the NNPC Tanker Nomination Schedule and she does not have the Nigerian Port Authority's Bunkering Permit, nor the Joint Task Force, Operation Pulo Shield certificate of registration," he said.
He however explained that the two Ghanaians and nine of the Nigerians were arrested when MT EVE was impounded by the navy at the Akasa River entrance for operating outside the approval granted them by the Naval Headquarters.
He said while the navy granted the vessel a permit to carry out oil operations in Port Harcourt, she was found at Akasa River in Bayelsa State.
He said the vessel was later found with Automative Gas Oil suspected to have been bought from illegal refineries in the area.
"The exact quantity of AGO on board the tanker as at the time of arrest is unknown but the captain maintains the quantity the tanker is carrying is 75,000 liters.
"The captain of the tanker could not explain the source of the product but stated that he loaded the product at Akasa. Laboratory analysis of the sample of the product from the tanker shows that the AGO product on board is of a poor diesel quality", he said.
Olutoyin also handed over the vessels and other items associated with the two cases including the passports of foreigners to the EFCC.Olutoyin in his remarks said EFCC would carry out further investigations to determine the culpability of the suspects.
"We will conclude investigations and charge them to court if they are culpable", he said adding that with the existing partnership between the EFCC and other security agencies, there was no hiding place for oil thieves
Posted by Unknown at 1:22:00 pm