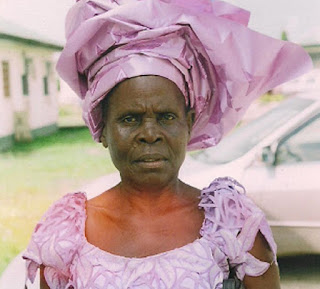 Madam Betinah Okunwa Benson, the 78-year old mother of Mr. Kabawei Benson, the Speaker of the Bayelsa State House of Assembly, has been kidnapped by unidentified gunmen in the early hours of Yesterday.
She was kidnapped at her country home in Korokorosei in Southern Ijaw Local Government Area of Bayelsa State, southsouth Nigeria.
It was gathered from family sources that at least 10 gunmen stormed the village in two speed boats. They shot in the air to scare people before she was abducted into one of their waiting boats to and taken to unknown destination...

Preye Kariamo, the Director of Press to the Speaker who confirmed the abduction of the mother of his boss, wondered why kidnappers could abduct a 78-year old woman.
He appealed to the gunmen to release the old woman unconditionally.
The Spokesman of the Bayelsa State Police, Fidelis Odunna, who also confirmed the kidnap, said the police have moved into action to secure the release of the old woman.
No group has so far claimed responsibility for the abduction, while family sources disclosed that no contact has been made with the kidnappers at press time...
Kidnapping is still thriving in our Country, we pray she comes out alive.
Posted by Unknown at 12:48:00 pm