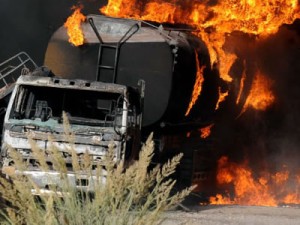 
The tanker which exploded at about 8:10am is said to have lost control and slipped into the motor park as the driver of the tanker tried to dodge an oncoming vehicle due to the narrowness and poor condition of the East/West road.
The petroleum tanker which immediately burst into flames claimed the life of Mrs Onyime and severely injured others who are currently receiving medical attention in undisclosed hospitals.
The ravaging effect of the fire was curbed by the prompt response of the fire service from neighbouring Bayelsa State, which was later joined by the firemen of Rivers State.
Asst. Corp Commander, Theophilus Egwim of the Federal Road Safety Corp confirmed the number of those injured and gave more insight on the cause of the incident.
It will be recalled that this incident is occurring barely six months after  a similar  occurrence at Okogbe Community which is less than 15 minutes’ drive from the motor park in Mbiama.
God help us this year, too many Fire accidents.
Posted by Unknown at 12:50:00 am