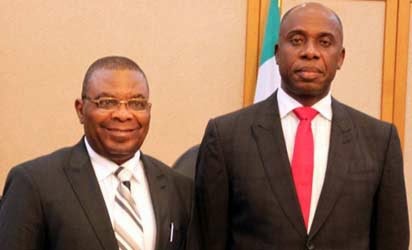 A Federal High court in Port Harcourt has nullified the recommendation of the National Judicial Council, NJC, for the position of a substansive chief judge of Rivers State.The NJC had recommended Justice Daisy Okocha for the position of the Chief Judge in the state but Governor Rotimi Amaechi had consistently refused to swear her in. Read full story after Cut.


Presiding judge, Justice Lambo Akanbi, while giving the judgement which lasted for almost 3 hours cited different instances and also explained the necessary sections of the constitution with regard to the matter before it. Justice Akanbi said NJC cannot compel Governor Amaechi to submit to its recommendation.He also upheld the advice of the Rivers State Judicial Service Commission, JSC, adding that the JSC has played its constitutional role in nominating a substansive Chief Judge.Olusola Dare, legal representative of Governor Amaechi said the Governor has been vindicated by the position of the court. Counsel to the NJC, Jimoh Lasis (SAN) told DailyPost that his clients will Appeal the judgment if they intend to proceed on the matter.

In the meantime, the Rivers State House of Assembly has confirmed the appointment of Justice Peter. Members of the House took turns to screen Justice Agumagu.Meanwhile, Justice Peter Agumagu has promised to allow the reign of rule of law and also allow justice to prevail in any given circumstance without fear of favour if appointed as the chief judge of Rivers State judiciary.Justice Agumagu also promised to improve on the welfare of the state high court Judges.He made the promises when he appeared before the Rivers State House of Assembly for a screening process for the position of the chief judge of the state judiciary.He said if appointed, he would ensure that modern judicial ethics will be practiced in the state, adding that automated systems will be applied.Speaker of the Assembly, Otelemaba Dan Amachree and 16 other members approved the appointment of justice Agumagu and recommended that the Governor should swear him-in.