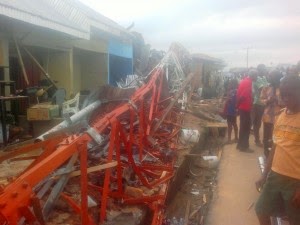 Tragedy struck in Odukpani local government area of Cross River State on Wednesday evening at about 6pm when a telecommunications mast said to belong to Globacom fell and killed two people.


Those killed were an eleven year old girl, Lawrencia John Asuquo and a middle aged man, Adindu Fynecountry.Lawrencia was on an errand for her father while Adindu was in his drugstore when the unfortunate incident occurred.Two others were fatally injured, several other sustained minor injuries and some houses were destroyed.Those critically injured were carried to the General Hospital in Calabar.The incident happened following a rainstorm that came with severe winds it was gathered.
It happened in Ntoe Edet Oqua Street in Odukpani Qua Town.Father of the deceased girl, Mr. John Asuquo Etok, a staff of Odukpani Local Government Council, was inconsolable yesterday.His words, “It’s just unfortunate the mast fell and killed my daughter as she went out to buy something from a nearby shop. Her name is Lawrencia John Asuquo and she was about to sit for the Primary 6 exams. She was a pupil of St. Theresa Primary School, Odukpani Qua Town. I want government to come to my aid as my house was also destroyed by the wind .I am presently homeless.  I want the state emergency management agency (SEMA) and Glo to come and assist me. I have seven children; five boys and two girls.”Brother of the deceased Fynecountry, Mr. Henry Okeke from Akwete in Ukwa East LGA, Abia state, said, “It was around 7pm I got a call that my brother was dead in Odukpani. His name is Adindu Fynecountry. When I got to Odukpani, I saw the corpse lying here. I could not do anything than to agree with the police, then we carried his corpse in the police van and deposited it in the mortuary.
I am here to see the Glo people and the National Communication Commission (NCC). There are lots of things we have to address in the matter because it’s a big disaster. I have not seen any of them yet to talk to. For now we are keeping our fingers crossed waiting for their response. He has 7 children. For now I can’t quantify the losses in his shop.”A lady who sustained some injuries from the incident, Mrs Blessing Edim, said “the mast fell as I was busy packing my goods as a result of the strong wind. I want government and Glo to come to our aid.

The estimated loss of my goods is worth over N100, 000.”A Globacom official in Calabar who pleaded anonymity said he was not his place to talk to the press.He however said the fallen mast was that of his company.He said, “The brand has sent emissary to the families of the victims to ensure that there have temporary palliative while awaiting instructions from the brand headquarters in Lagos on how to resolve the issues at stake.’’
Posted by Unknown at 5:59:00 pm