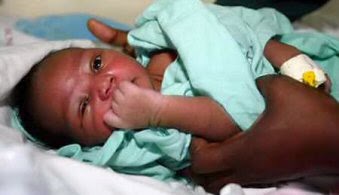 A young woman has abandoned her new born baby at the “Demonstration Clinic” of the Rivers State College of Health Science and Technology, Port Harcourt. Blessing Ako-Ile, Chief Nursing Officer in-charge of the clinic disclosed this on Friday. Read full story after cut.


According to Ako-Ile, the woman, aged 28, walked into the clinic at odd hours showing signs of distress and immense labour pains.
She said the nurses on duty immediately rushed the woman into the labour room, she was delivered of a baby boy.


Ako-Ile said the nurses discovered that the woman was no longer with the baby at about 4 am, when power was restored and one of the nurses went to change the power source from the generator.“Initially we thought that she went to ease herself outside but when we checked around and did not see her, it became clear that she had abandoned the baby.

“We then had no option than to get baby things that will be used to ensure the baby is in good condition”, she stated.


The Chief Nursing Officer said the College Authority had been alerted and that the baby would be transferred to the children’s home in the next 24 hours as the clinic had no facilities needed to keep the baby for a long time.


Blessing Ako-Ile, Chief Nursing Officer in-charge of the Demonstration Clinic also confirmed that no one had come to the clinic in respect of the baby since the mother left
Posted by Unknown at 10:25:00 pm