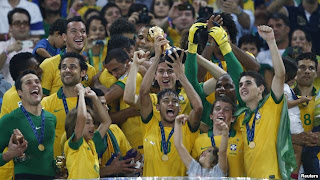 I will say it was an easy win for the samba boys of Brazil as they humbled world Champions Spain to a 3 goal defeat at the famous Maracana stadium in Rio De genero.

The FIFA Confederation Cup 2013 which was a tournament marked by nationwide protests, ended with a reminder of Brazil's enduring quality as a football powerhouse, which has previously served as uniting factor for the entire nation.

With Two goals from Fred and the other from Neymar it was a good way to make sure the headlines would be made by their exploits as they dominated a team holding both the World Cup and European Championship trophies.