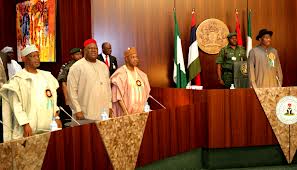 The Federal Executive Council (FEC) on Wednesday said it has discovered 45, 000 ghost workers from 251 ministries, departments and agencies (MDAs) of government under the Integrated Payroll and Personal Information System, (IPPIS), Now The Question is Are you surprised at this Finding?

Read More After the Cut

The Minister of State for Finance, Yerima Ngama said this while briefing State House correspondents after the FEC meeting where the ministry of finance and foreign affairs briefed the council on the achievements of their ministries in 2012. Correspondents after the FEC meeting where the ministry of finance and foreign affairs briefed the council on the achievements of their ministries in 2012.
According to him, the Integrated Personnel Payment System (IPPS) in 215 Ministries, Departments and Agencies MDAs has ensured that government expenditure could be traced.
“We have registered over 153,000 federal government workers. But compared to the total number of staff that used to get salaries in these MDAs, we have seen a gap of 45,000 people missing. So, we have already declared that they are ghost workers.
“We have about 320 MDAs that we have not covered and when we cover this, we may actually discover more and reduce the total payroll cost to the country” he said.
Mr Ngama said the exercise will be expedited in order to ensure that appreciable progress was made by the end of 2013.
He said  a centralized bio-data of staff have been established and is domiciled in the office of the Accountant General of the Federation AGF.
“Whether you are working in a University in Uyo, or any federal establishment in Nigeria, by the press of a button, your salary will go to your account,” Mr Yerima noted.
The minister also said that the ministry has done well to stabilize the financial system through the stabilization of the Macro Economy.
On the consolidation of the budget, Mr Ngama said the ministry was able to bring the budget deficit from 6.8 percent in 2010 to 2.3 percent in 2011 budget.
He said the ministry also focused on reducing the recurrent expenditure quotient so that more funds would be available for the development in the real sector.
The minister said the target of the ministry is to achieve a 60 percent capital expenditure budget while 40 percent is budgeted for recurrent expenditure.
He blamed the increase in salary by 53 percent in 2010 for the dysfunction in the country’s budgetary process, noting that with the increase in salary, government has to rely on bonds to pay salaries thereby pushing up domestic debt to N6.634 Trillion.
The Council also constituted a special committee to verify Nigeria’s assets all over the world, valued at billions of naira
The Minister of Information, Labaran Maku said that the inter- ministerial committee will go round the world and verify Nigerian assets abroad including those of the foreign affairs ministry, assets of the Nigeria Ports Authority and the Nigerian navy.